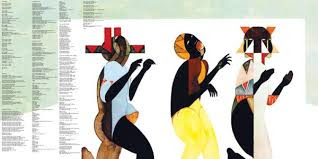 It is a pretty close call but my favourite Stevie Wonder album has to be Innervisions from 1973.
Part of his classic triumvirate along with Talking Book and Songs in the Key of Life when he was at his creative peak in the early 70's

I got my copy courtesy of the Guardian - you collected tokens and then sent off for four classic albums: Innervisions, Velvet Underground & Nico, What's Going On by Marvin Gaye and Reckoning by REM

I was totally blown away the first time I heard it and playing it in the car the other day had the same affect.
All nine songs would be worthy of featuring but I have gone for Higher Ground and the piece of sheer unadulterated genius that is Living For The City.

Stevie Wonder - Living For The City