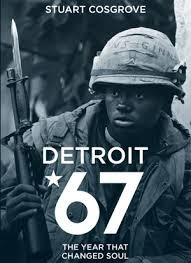 I've finally got round to purchasing Stuart Cosgrove's Detroit 67 and have reached the end of March.
It is an interesting read.
The main focus so far has been on the trials and tribulations of The Supremes and the departure of Florence Ballard.
I've never been a huge fan mainly because I cannae go Diana Ross who always strikes me as being a bit too full of herself.
The did have some good tunes though. Here is Baby Love.On my Soul Decade:The Sixties this is credited to Diana Ross and the Supremes but that is wrong as it is from 1964 and they did not change their name until 1967

The Supremes were the biggest girl group on the planet never mind Detroit. However girl bands in Detroit and on the Motown label were 10 a penny and here are one of their rivals The Marvelettes who appear to be in their night attire in part of this clip.

The Marvelettes - When You're Young and in Love
Posted by Charity Chic at 08:00