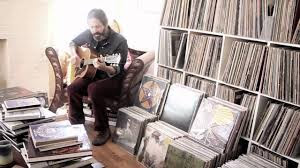 It's Americana time again folks with the great Neal Casal and a couple of tracks from Anytime Tomorrow his 2000 album on Germany's Glitterhouse Records.
He has featured before as a member of Hazy Malaze.
He was also one of Ryan Adam's Cardinals, a member of the Chris Robinson Brotherhood and also Hard Working Americans.
I've also seen him playing guitar as part of Lucinda Williams band.
So he has been a busy boy over the years
I would recommend Anytime Tomorrow but alternatively Leaving Traces: Songs 1994-2004 is perhaps a better place to start
He is also a talented photographer contributing pictures for a number of records but not, I suspect, all those featured above.

Neal Casal -Eddy and Diamonds
Posted by Charity Chic at 08:00