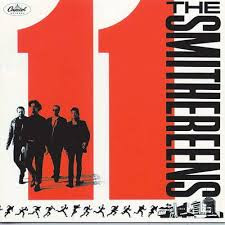 Round about 1996 or 1997 I travelled to Boston for a couple of weeks to visit a pal who had got a job there.
I had an interesting time wandering about whilst he was working and drinking far too much beer when he wasn't.
My wanderings took me to several second hand record shops and I know for a fact that I came away with a good few CDs. However for the life of me I cannot say with absolute certainty which of my many CDs came from this trip.With one exception.
I am 100% sure that my copy of 11 the 1989 album  by The Smithereens was purchased there.
I'm not at all sure how they crossed my radar but I'm pretty certain that it wasn't a totally random choice.I think I may have been familiar with A Girl Like You
It has been a while since I've played this until now and there are some good power pop songs on the album.These two in particular
Having said that I have never really felt the urge to explore them further.

The Smithereens - Blues Before and After
Posted by Charity Chic at 08:00