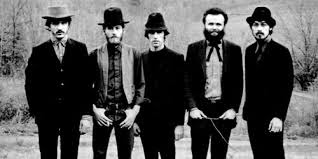 First up is Danko/ Manuel a Jason Isbell song - a tribute song "for and about a couple members of The Band who are no longer with us." and one which features on the Drive-By Truckers 2004 album The Dirty South.
Jason explains further When I started writing this one, I wanted to capture some of Levon Helm's feelings about the deaths (and lives) of Richard Manuel and Rick Danko. The longer I worked on the song, the more impossible that became. I felt like the best I could do was to explain my own attitude toward being a working and traveling musician.

The DBT's are followed by Little Feat with a terrific live version of The Band's Rag Mama Rag taken from Little Feat Live at the Rams Head,
Finally we have The Band themselves with the mighty King Harvest (Has Surely Come).

So no tenuousconnections this week
More random nonsense next Saturday

The Band - King Harvest (Has Surely Come)
Posted by Charity Chic at 08:00