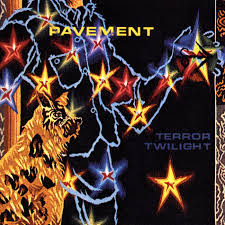 I suspect that I may well be taken to task in certain quarters but the only album I own by indie favourites Pavement is Terror Twilight their fifth and final album from 1999 on Domino Records.
I have nothing by Stephen Malkmus either nor have I knowingly heard any of his stuff.
I have given Slanted and Enchanted a cursory listen but whereas it features in numerous best of lists it didn't do much for me I'm afraid.
Perhaps it is due another listen given that Terror Twilight is somewhat better that I remembered.
Feel free to enlighten me.

Pavement - Spit on a Stranger