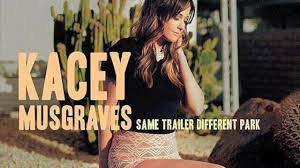 Kacey Musgraves has just released a new album Pageant Material.
I figure that allows me to feature her previous album the great Same Trailer Different Park from way back in 2013 winner of a Grammy Award and an ACM Award for album of the year.
She appeared on an American singing competition  Nashville Star in 2007 finishing seventh.
However she is no manufactured pop star or CMTV bimbo.
She writes all her own songs and plays acoustic guitar,mandolin, harmonica and banjo
Her lyrics also challenge the traditional redneck conservative Nashville country industry.
In short a breath of fresh air.

Kacey Musgraves - Follow Your Arrow
Posted by Charity Chic at 08:00