The Sundays on a Monday 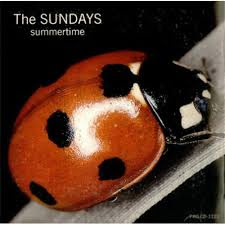 Up until fairly recently I was blissfully unaware of The Sundays
However my eyes have since been opened thanks to Scott and The Robster both of whom have featured them recently.
Harriet Wheeler and the lads released three albums in the 90's with the bloggers waxing lyrical about their 1990 debut Reading, Writing and Arithmetic  in particular.
I chanced upon their 1993 single Summertime in my local charity shop the other week and felt obliged to purchase and then subsequently feature it.
It was their biggest hit peaking at number 15 and it rings a vague bell in the far reaches of my mind suggesting that I have probably heard it before.
Pretty topical too if it ever stops raining!

The Sundays - Nothing Sweet