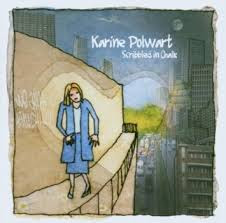 It is a wee while since Karine Polwart one of the finest contemporary Scottish folk artists has appeared on CCM.
Today we feature Scribbled in Chalk her second album from back in 2006 and her follow up to 2005's Faultlines which won three awards at the BBC Folk Awards including Best Album.
She releases music through Hegri Music , hegri being the Gaelic for heron her favourite bird and the subject of the song Follow the Heron which was originally recorded in 2002 for the Malinky album Three Ravens.

She has a Masters degree in Philosophical Inquiry which is often reflected in her song writing  and in her politics where she is a member of the Scottish Green Party and a strong advocate for Scottish independence.

Karine Polwart - I'm Gonna Do It All

Karine Polwart - Follow The Heron
Posted by Charity Chic at 08:00