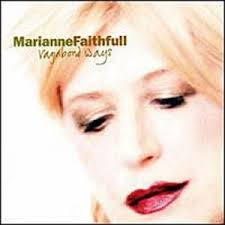 How about a wee bit of Marianne Faithfull to ease you into the working week? Yup, thought so
Vagabond Ways from 1999 is produced by Mark Howard with a little bit of Daniel Lanois thrown in for good measure and also features Pink Floyd's Roger Walters
Whereas I'm sure that the title track is not autobiographical in does capture some of the bohemianism, decadence and hedonism for which Marianne is renowned.
For me the pick of the album is probably her interpretation of Leonard Cohen's Tower of Song which would even make old Laughing Len crack a smile.

Marianne Faithfull - Tower of Song
Posted by Charity Chic at 08:00