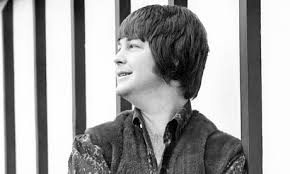 Mrs CC and I went to see Love & Mercy the Brian Wilson biopic the other night and very good it was too.
It concentrates on two periods in his life the recording of Pet Sounds and Good Vibrations and the 80's when Brian was a recluse post mental breakdown and under the care and exploitation of Dr Eugene Landy.

The 80's Wilson is played by John Cusack who is pretty good. However, Paul Dano who plays the 60's Wilson is an absolute revelation in terms of his  acting, his physical similarity to Wilson and for his singing prowess.
Directed by Bill Pohlad the screenwriting is by Oren Moverman who co-wrote the 2007 Bob Dylan portrait I'm Not There.
It is well worth seeing if you get the chance.Certainly much much better than your average biopic