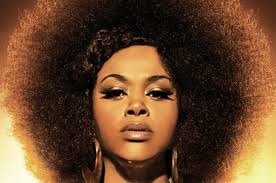 As a special prize for George for guessing today we feature Jill Scott.
I only have her debut album Who is Jill Scott ? Words and Sounds Vol 1 from 2000 purchased in that neo- soul hotspot Newton Stewart in rural Galloway.
Even although the album went platinum I have never felt the desire to seek out volumes 2 and 3 or indeed her other two albums.
It is really not my sort of thing at all.A Long Walk is pretty good but I can take or leave the rest. Some of the songs are pretty raunchy but I will spare you them in case you choke your cornflakes.
Can't really see me taking this one down off the shelf again any time soon.

In addition to being a singer she is also an actress and has appeared as Big Mama Thortnon in Hounddog and as James Brown's second wife.She also had the lead role in the TV adaptation of Alexander McCall Smith's great book The No 1 Ladies Detective Agency