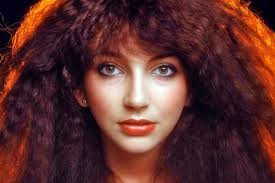 Kate Bush is an artist who divides opinion. There are those who think that she is the absolute bees knees (Robster take a bow) and those who find her voice annoying.
Me, I am somewhere in the middle.
I think that she has recorded some fine songs, the two below being particularly good examples
I also admire the fact that she is prepared to take risks and to try new things rather than churn out the same old same old.
She is also somewhat reclusive and doesn't play the media's game or dance to their tune. Somewhat strangely this has not worked against her and she rarely gets bad press as the hype in  the run up to her 22 night residency in the Hammersmith Apollo in 2014 which sold out in 15 minutes demonstrated.