Yo Pretty Ladies Around the World 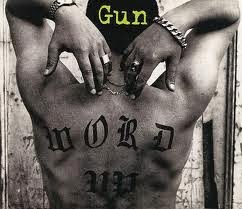 When I recently posted El Presidente I mentioned that Dante Gizzi had formerly been a member of Gun best known for their cover of Cameo's Word Up!
Therefore when I saw Gun's album Swagger, which contains said song, for 50p in Oxfam in St Andrews it seemed too good an opportunity to pass up.
Dante(on bass) is joined by brother Giuliano on guitar, Mark Rankin on vocals and Mark Kerr on drums on this album from 1994.
The majority of  the album is not unpleasant heavy metal lite if such a sub genre exists. Harmonica's also feature with an interesting attempt at metal rap with Something Worthwhile.
Not a codpiece in sight I'm glad to report!