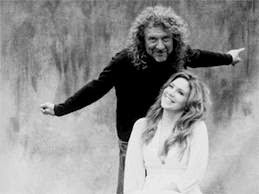 What happened when hirsute Rock God Robert Plant met bluegrass chanteuse and fiddler Alison Krauss?
2007's Rising Sand on Rounder Records produced by go to Americana producer T-Bone Burnett - that's what
Winner of the Album of the Year in the 2009 Grammy Awards
The first song featured is an Everly Brother's cover - wonder who's playing Don and who's playing Phil.
This is the second time that  a  cover of Fortune Teller has featured on CCM the first being from Ash back in March 2013.
Given the success of this album you would have thought that a sequel may have been on the cards.
But let's face it it is not as if either of them (especially Bob) needs the money.
I heard a radio interview with Alison Krauss when she was asked the question.
She made all the right noises re busy schedules and competing priorities but between the lines I got the distinct impression that she wasn't keen to repeat the experience anytime soon.
Purchases in a Nairn charity shop