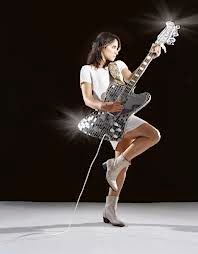 We are off to Anstruther in the East Neuk of Fife for a few days.
Kate Victoria  (KT) Tunstall is no stranger to that part of the world having grown up in St Andrews and having been a member of the Fence Collective.
She shot to fame with 2004's Eye of the Telescope.
These two tracks, and the picture, however, are taken from her 2007 Drastic Fantastic album - a charity shop acquisition.
Claim to fame - we were married in Flodigarry Country House Hotel in Skye in 2008 , three weeks after her and by the same registrar.
She and her husband, Luke Bullen the drummer from her band divorced in 2013. Mrs CC and I are still going strong.