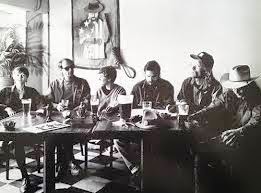 George has stated on more than one occasion that Satisfied Minds by the Walkabouts is one of the top 10 albums of all time and he will get no arguments on that assertion from this quarter.
His recent post got me to listening to the other couple of things I have by the Walkabouts.
1996's Devil's Road is good but obviously not in the same league.
The only other stuff I have by them is a CD single of Good Luck Morning a track from the 1994 album Setting the Woods on Fire which is the follow up to Satisfied Minds.
The title track is pretty good but it pales into insignificance when compared to a live version of Findlay's Motel recorded at the Paradiso, Amsterdam on 13th June 1993 around the time that the band were at the top of their game.
It is so good that it wouldn't be out of place on Satisfied Minds.
It would also make a terrific Art House film