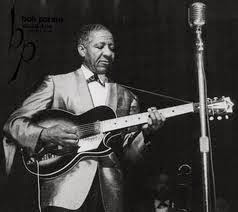 Potentially the first artist to appear on CCM who was born in the 19th century.
Alonzo "Lonnie" Johnson was born on February 8th 1899 in New Orleans and died on June 16th 1970 in Toronto.
A pioneer of the single string solo guitar style this is Blues at its simplest and quite possibly at its best.
As the sleevenotes say
" His songs were copied or extensively borrowed from by other singers,while his sleek ,imperturbable guitar-playing had musicians practicing furiously,trying to capture his speed, his timing and,above all, his ravishing tone"
A certain skiffle artist one Tony Donegan was so impressed when opening for him in 1952 that he changed his stage name to Lonnie.
However, we are going further back than 1952 for today's songs - much further back - as far back as 1927!
The first being recorded in New York on 3rd October and the second in Chicago on 12th December .
Although  these songs are 87 years old the recording quality is pretty impressive and they remain great. great songs.
Enjoy