A Shot in the Dark, The Big Question Mark 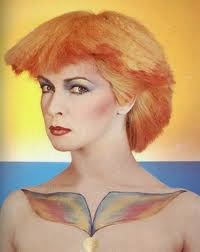 For years I have on occasions sung the line A Shot in the Dark, The Big Question Mark for no apparent reason.
It is taken from It's a Mystery a song from Toyah which is  track 1, side 2 from her 1981 album  Anthem her 4th album but the one that shot her to prominence.
It  was released as part of an EP - Four from Toyah -which reached number 4 in the UK singles chart in 1981
As well as a career in singing and acting she has recently appeared in some celebrity diving show nonsense.
Toyah was Ms Willcox  back them as opposed to Mrs Fripp as she did not marry the former King Crimson front man Robert until 1986.

Toyah - It's a Mystery