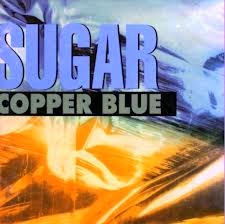 Copper Blue is the  debut album by Sugar the band formed by former Husker  Du frontman Bob Mould which was voted 1992 album of the year by NME.
Bob is joined by Dave  Barbe on bass and Malcolm Travis on drums.
It is a fantastic album and one I'm sure that many of you already have.
If not , I'm sure you'll rectify this after hearing these two tracks.
It was followed up by Beaster which is a different beast altogether -a total noisefest.
There was then File Under Easy Listening which I was sure I had but apparently not
I'm also pretty sure that George and I saw them at Glasgow's Barrowlands back in the day
Bob Mould, I'm happy to report, is still going strong and is pretty prolific having just released  yet another solo album Beauty & Ruin

Sugar - If I Can't Change Your Mind