I Wanna Be Your Joey Ramone 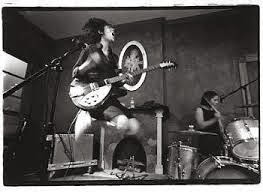 Sleater- Kinney  from Olympia, Washington have to go down as one of the original Riot Grrrl bands.
Their homage to Mr Ramone is taken from Call the Doctor their second album from 1996.
The line up is Corin Tucker -vocals, guitars ;Carrie Kinney -guitars and vocals and Lora Macfarlane on drums
The group's name is derived from the Sleater Kinney Road, Interstate 5 Exit no 108 in Lacey Washington which is probably slightly more rock 'n'roll than Raith Interchange, Junction 5, M74
These two short and sweet songs are somewhat Pixie-esque which lets face it is no bad thing.
.
Play loud.

Sleater-Kinney - I Wanna Be Your Joey Ramone