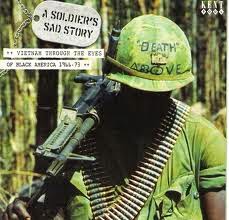 Another album as opposed to individual artist this week.
From the mighty Kent label here are three tracks from the utterly marvelous A Soldier's Sad Song - Vietnam Through The Eyes of Black America 1966 - 73.
Before we get to the music a couple of quotes from the sleevenotes.
" Of the 240,00 men recruited under Project 100,000 (the draft) between October 1966 and June 1969 41% were black, although black Americans represented only 11% of the US population"
"They want me to go to Vietnam to shoot some folks that never lynched me, never called me "n*****", never assassinated my leaders" Muhammad Ali
Now to the music - firstly Joe Tex jumpin' out his foxhole to get himself two mo' enemies.
I'm not sure whether Bill Withers constitutes Southern Soul but I couldn't miss out I Can't Write Left Handed.
Finally, on the basis that this could never be followed, Jerry Williams Jr (aka Swamp Dogg) with John Prine's Sam Stone.
Has there ever been a more poignant line written than " There's a hole in daddy's arm where all the money goes"?
If you do not have  this magnificent album I'm sure that you will rectify this before the week is out.