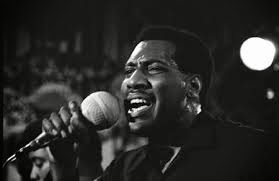 As a wise man commented on my recent Aretha post "sometimes you have to post what might be deemed to be obvious. And that's not a bad thing"
I heard (Sittin' On) The Dock of the Bay on the radio the other day and thought yup this is going on come Sunday.
The world and their wife are familiar with this song and everyone can whistle the refrain. But it is just absolutely terrific.
To compensate for posting Otis' most popular song I'm also going to give you, as a wee treat, one of his rarest.
Here is Otis with his original demo version of You Left The Water Running recorded at FAME Studios in early 1967.
With simple percussion and accompanying himself on guitar here is a 4 minute version where he ran through the song twice adding a few ad libs of his own

Otis Redding - (Sittin' On) The Dock of the Bay