The Arabs v The Saints 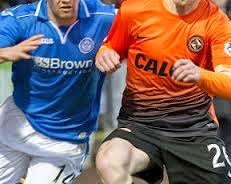 I am off to Parkhead today for the Scottish Cup Final - Dundee United versus St Johnstone.
Pies, sausage rolls and beers in a nearby Bowling club and then off to the game.
United were serial cup final losers for a while but have managed to win it twice against Rangers and Ross County.
This is the first time the Saints have made the final.
I'm supporting United and if they turn up they should win it pretty convincingly.
However St Johnstone have been the form team in recent weeks, whereas United have faded, and have a danger man in Stevie May.
I'm going for 2-1 for United and therefore you are getting two United songs versus one for the Saintees.

Come on you Arabs!

John Paul Young - Love is in the Air

Chris Barber with Ottilie Patterson - When the Saints Go Marching In
Posted by Charity Chic at 08:00