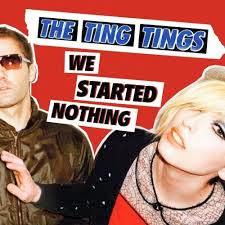 Not sure how this one will go down.
You will either consider these to be a couple of pleasant pop ditties or they will annoy you intensely.
The Ting Tings are/were Katie White and Jules De Martino.
I was under the misapprehension that they were from Sweden or Denmark but it turns out they are from the equally exotic Salford in Greater Manchester.
In my view these are pretty much perfect pop songs. Pretty catchy at the time but not really designed to stand the tests of time.Discuss.
There was a bit of a novelty feel to this band. They enjoyed their 15 minutes of fame.
This album from 2008 was a number one in the UK. The follow up Sounds from Nowheresville in 2012 pretty much bombed and I will be surprised if a third album ever see's the light of day.
Fun while it lasted

The Ting Tings - That's Not my Name

The Ting Tings -Shut Up and Let Me Go
Posted by Charity Chic at 08:00