I think I have solved the mystery of the phenomenal success of Bloodshot Tuesday 16. It seems it coincided with the launch of a comic here
I have a picture in my mind's eye of a lot of young turks reading their comics with Bob Wills , the King of Western Swing warbling away in the background.
The solution to get more hits is obviously by linking your title to something more topical eg  Tom Daly or Santa Claus or some such thing.
In the unlikely event of any of the comic readers having hung about I'm sure they will be impressed by the Waco Brothers and Electric Waco Chair (BS054) from 2000 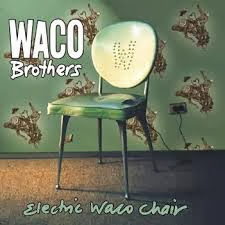 As I've said before they may not be the most musically accomplished band in the world but what they lack in technical expertise they more than make up for in raw enthusiasm.
They are terrific life. One fellow blogger, who shall remain nameless, once managed to sleep through their entire set in a drunken stupor which is pretty impressive

Waco Brothers -Walking on Hell's Roof Looking at the Flowers
Posted by Charity Chic at 08:00