Mooner - Powerpop for the 21st Century 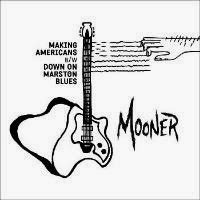 Here is a wee Christmas bonus for you
I know that the likes of Swiss Adam and Ernie Goggins from 27 leggies get stuff sent to them frequently from bands looking for a plug
But it is a relatively new phenomenon for me.
This however appeared recently from Chicago powerpop band Mooner and it is rather good
According to their blurb  Mooner's relentless double guitar attack and deceptively simple songwriting bear aloft the joys and pains of love, television, politics, and other detritus of modern Midwestern life.
Well whatever - here they are for your listening pleasure