It's A Family Affair 2 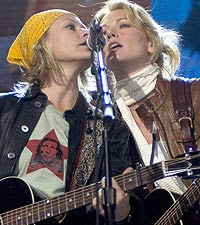 Allison on the left and Shelby on the right (I think!)

It's another couple of Country sisters who feature today on this occasional series of family members who have found musical fame in their own right as opposed to a family collective.
We'll start with the eldest first.
Shelby Lynne was born as Shelby Lynn Moorer in 1968. She is probably most famous for her breakthrough  1999 album I Am Shelby Lynne released 10 years after her debut album Sunrise.
It would be a further 9 years before she released her fantastic Dusty Springfield tribute album Just a Little Lovin' the title track of which is featured here.
Her younger sister Allison Moorer was born in 1972.
She has released 8 albums to date  along with a couple of compilations but probably has not had the same commercial success as her big sister although many are critically acclaimed
The track featured is from her second album 2000's The Hardest Part.
She is currently Mrs Steve Earle the 6th or 7th (not sure which given that he has married one of his wives twice!)
Tragically in 1986 their estranged father shot and killed their mother before killing himself.
A good grounding for a career in country music then!

Allison Moorer - Think It Over