It's the final week of Bloodshot Tuesday and we end with an artist and album which have also appeared on Mexican Monday
Alejandro Escovedo has recorded over a dozen albums in his long and varied career with a couple including 2001's A Man Under the Influence (BS064) appearing on Bloodshot. 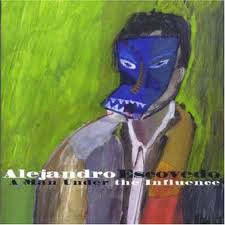 As Rolling Stone put it "musically Alejandro Escovedo is his own genre"
If you ever get the chance to see him live, take it - you will not regret it
He is a true legend on the Austin Music scene and his entry on the Bloodshot artists page gives a potted history of his various guises.

Hope you have enjoyed Bloodshot Tuesday and that it has tempted you to check out some more stuff from the artists featured.
And a big thanks to all those who  inadvertently tuned into Bloodshot 16 thinking it referred to the comic or to an episode from The Mentalist.You gave CCM it's biggest hit to date and hopefully some of you even hung around.