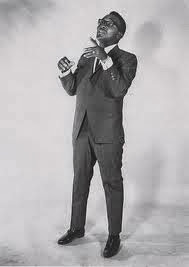 Memphis  native Overton Vertis Wright (known to you and me as O.V.) is described in the Backbeat compilation of 25 of his finest tracks from 1965 to 1975 as a Giant of Southern Soul.
Now, in any picture I have ever seen of him he does not strike me as a particularly tall fellow so I am assuming this is a reference to his music which is indeed rather splendid.
He was a member of a number of gospel groups in his youth including The Five Harmonaires, The Spirit of Memphis Quartet and the Highway QCs - surely a project there for Jim McLean's rabbit
You can hear the gospel influence in his subsequent songs.
Unfortunately O.V. died aged just 41 from a heart attack most probably brought about by his on-going drug problems. He had previously been jailed for narcotics offences.
So famous that they named a quaint garden suburb of Wishaw in North Lanarkshire after him  allegedly