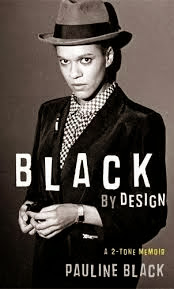 This week I have been mostly reading Black By Design the autobiography of Pauline Black the lead singer of The Selecter as opposed to The Selector as she is at pains to point out.
It is an interesting read and is quite funny and opinionated in places.
She was adopted as a baby in the late 50's by a white couple in overtly racist Romford in Essex.
She subsequently was working as a radiographer and singing Dylan covers in pubs and clubs when she was in the right place at the right time when the 2-Tone revolution in Coventry kicked off.
There is the usual story of the formation and dynamics of band life before the inevitable musical differences kicked in.
Interestingly, and somewhat sadly, The Selecter of hit record fame lasted for a considerably shorter period of time than the reformed version cashing in on the demand for retro 70's and 80's bands pumping out the songs from yesteryear.
Well worth a read.

The Selecter - On My Radio