I Come From Another Planet Baby 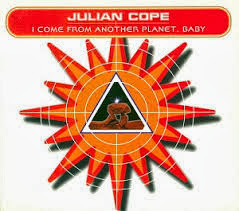 I'm not 100% convinced that the great Arch Druid is not being autobiographical on this song cos let's face it he is as mad as a box of frogs!
The former Teardrop Explodes front man has been pretty prolific over the years with every record being seemingly stranger that the last.
His autobiographical books Head On and Repossessed are must reads for anyone who considers  themselves to be a music fan.
He is a renowned musicologist championing the obscure and is a huge fan of Krautrock.
He has also written a couple of well received books on archaeology and antiquarianism and is something of an authority on stone circles and other Neolithic and Bronze Age monuments.
Live, he is never less than entertaining.
A national treasure and as the NME put it in January 2011 "this man should have his own blue plaque"
Oh and the music is pretty good too.

Psychic Relief in the mid-90's - indeed

Julian Cope - I Come From Another Planet Baby

Julian Cope - How Do I Understand My Motorman
Posted by Charity Chic at 08:00