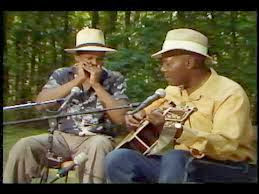 In the early 1990's the CCA in Glasgow's Sauchiehall Street put on the occasional Blues night.
One act I saw was Catfish Keith who I subsequently saw several times but never got round to acquiring any of his records - I suspect he was better live.
Someone else I saw, and who's record I did purchase were Cephas and Wiggins , or to give them their full title Bowling Green John Cephas and Harmonica Phil Wiggins.
The album I purchased and got signed was Guitar Man from 1989 on Flying Fish Records. I spent all the money I had left on this and some kind soul took pity on me and stood me a pint.
According to the sleevenotes they perform, preach and teach a brand of traditional music known as Piedmont blues. Geographically the Piedmont stretches from Richmond to Atlanta.
Sadly Bowling Green John passed on in 2009 although thankfully Harmonica Phil is still alive and kicking and presumably still playing the moothie
Here is the title track from said album.