It's a Family Affair 3 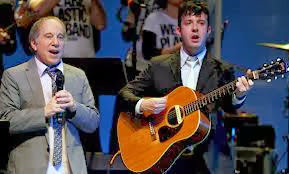 Not so much a Mother and Child Reunion as a Father and Son one.
Paul Simon needs no introduction. Along with Art Garfunkel he was a member of the most commercially successful duo of all times
He also wrote all the songs. The George Michael to Art's Andrew Ridgley perhaps although Art could bash out a tune even if his voice annoyed many folk.
His solo output was pretty successful too.
Less well known is Paul's son Harper James Simon born in 1972 to Paul and his first wife Peggy Harper (hence the name -I'm guessing!)
He had performed in various bands and contributed music to films prior to his debut album Harper Simon in 2010.
It was critically acclaimed but it is not hard to see the links with his old man who co-wrote a few songs and also appeared on the album.
I have not heard it, but apparently his 2013 follow up Division Street is more rockier and has received less comparisons to his father

Paul Simon - Me and Julio Down by the Schoolyard