The Voice of a Beehive 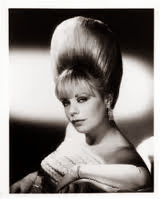 A few months ago I posted versions of Cry Me a River by Diana Krall, Kim Edgar and Julie London here
Drew, quite rightly, took me to task for not featuring the version by Neasden's Queen of Soul Mari Wilson.
The reason for this was reasonably simple - I did not have it at the time.
This has since been rectified with the purchasing of her 1983 album Showpeople.(£1.99 Oxfam).
I have also included her biggest hit Just What I Always Wanted her only song to trouble the top 20 peaking at no 8.
30 years on it still sounds pretty good to me.
I had a notion that Tracey Ullman had also covered this but it seems that I was getting mixed up with her cover of Kirsty MacColl's They Don't Know.
Old age, it doesn't come itself

Mari Wilson - Cry Me a River