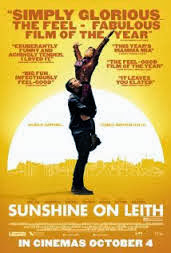 I haven't seen Sunshine on Leith the musical based on the music of The Proclaimers.
In the Scottish press it gets pretty good reviews described as a feel good film. A bit like Mama Mia except that it is good.
However, I struggle with Sunshine on Leith as a feel good song as I associate it with a friend's funeral where it was played.
Life With You on the other hand is a feelgood song

The Proclaimers -Sunshine on Leith

The Proclaimers - Life With You
Posted by Charity Chic at 09:00