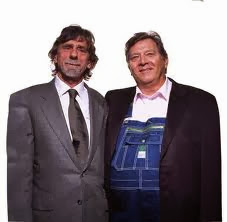 You wouldn't necessarily know it from this picture but Dann Penn (resplendent in dungarees) and Spooner Oldham are hugely influential figures in the history of Southern Soul Music.
As both writers and performers they were key figures in the Muscle Shoals Sound coming out of the Fame studios in Alabama in the 60's.
And what songs they  wrote -Sweet Inspiration, Cry Like a Baby, Out Left Field, I Met Her in Church and so it goes on.
As featured last week Dan Penn was also the writer with Chips Moman of Dark End of the Street.
Oh, and I nearly forgot I'm Your Puppet their song made famous by James and Bobby Purify.
These two songs are taken from Moments From this Theatre their live album from 1998.
I saw them doing all these songs at the Arches in Glasgow a few years later and they were simply awesome.
Taken from the Proper American website this quote from John Aizlewood puts it better than I ever could:

Dan Penn & Spooner Oldham - The Dark End of the Street