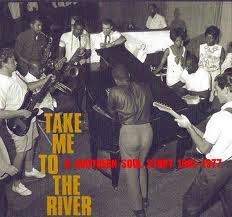 Seeing as how it is Sunday it is surely time for the Reverend Al Green from Forest City, Arkansas with the title song from the simply magnificent Kent 3 CD Box Set - Take Me to the River: A Southern Soul Story 1961-1977
75 songs and not a dud amongst  them
Written by the Reverend and Teenie Hodges it was first released on the Al Green Explores Your Mind LP on Hi and was not originally released as a single.
Hi stablemate Syl Johnson put it out as a single and had a huge hit.

It was subsequently introduced to a new generation by the Talking Heads on 1984's Stop Making Sense -surely one of the best live records of all time.
Not Southern Soul but what the heck!

Al Green - Take Me To The River

Talking Heads - Take Me To The River
Posted by Charity Chic at 08:00