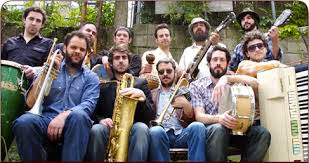 It's time for some Staten Island based, heavily bearded instrumental funk courtesy of the Budos Band.

From the mighty Daptone Records stable they take inspiration from African music,psychedelic rock and doom metal (whatever that may be).
They range from around 10 to 12 members led by the splendidly named Jared Tankel on baritone saxophone.
Their imaginatively named albums are the Budos Band, Budos Band II and Budos Band III along with an EP  somewhat surprisingly entitled the Budos Band EP
All recorded in the Daptone House of Soul studio in Brooklyn, New York
Apparently, they have played on every continent with the exception of Antarctica.
Perhaps it's just as well as their funky music would almost certainly melt the polar ice cap!

The Budos Band - Up From the South

The Budos Band - Budos Rising
Posted by Charity Chic at 08:00