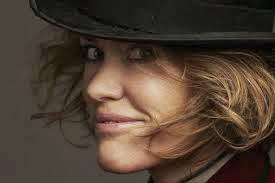 6 Radio DJ and former "I'm a Nonentity" participant  Cerys Matthews has previously graced these pages in duets with Space and Tom Jones.here
Here she goes solo with a couple of weather related songs from the rather fabulous Never Said Goodbye - Rough Trade (2006) which I bought a couple of weeks ago in Oxfam at Clarkston Toll, Glasgow.
I was convinced that the second song was a cover but no it was written by Cerys and Gruff Rhys
And then it came to me - it reminds me of Pleasant Valley Sunday which has also featured here
She may yet appear as part of Catatonia.