Bullmoose Jackson's carry-onesque (think I might have invented a new word) Big Ten Inch record  recently featured on Jim McLean's Rabbit  got me to thinking about the 10 inch singles (all two of them) which I own.
First up is Big Decision by That Petrol Emotion 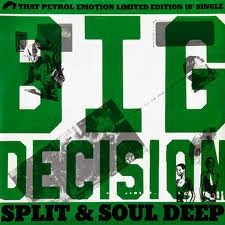 My memory may be failing me but I think it may well have come free with the splendid album Babble.
That Petrol Emotion featured John and Damian O'Neill , two former Undertones us bloggers can wax lyrical about unlike Dirk's pen pal F****l S*****y

That Petrol Emotion -Big Decision
Posted by Charity Chic at 09:00