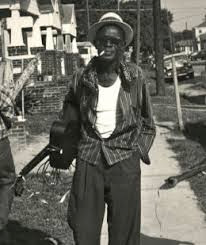 Sam  Lightnin' Hopkins was judged by Rolling Stone magazine to be the 71st best guitar player of all time - the 70 who are better must be pretty tasty.
The Texan bluesman was recording from 1946 until shortly before his death in 1982 at the age of 69.
He was a friend and influence on fellow Texans Townes Van Zandt and Steve Earle and recorded with the 13th Floor Elevators.
It is estimated that he has recorded between 800 to 1000 songs during his long and illustrious career
Here are two from 1952 on the RPM label.purchased at a record library sale
Enjoy