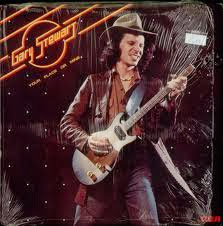 It was Ernie Goggins from the splendid 27 Leggies who first introduced me to country rocker Gary Stewart.

Born in 1944 Gary lived his life like it was a country song with a fondness for drink and drugs leading to his early death in 2003 at the age of 59.
I picked up a copy of his 1977 album Your Place or Mine in excellent condition in Oxfam in St Andrews from which  this track is taken.
A reassuring number of the tracks appear to revolve round drink.
Alas, the album does not include the fantastically titled She's Actin' Single (I'm Drinkin' Doubles) which featured in 1975's Out of Hand - which remains on the wish list
Friday night is Country night!

Gary Stewart - Broken Hearted People (Take Me to a Barroom)
Posted by Charity Chic at 08:00