It's A Family Affair 1

First up in this occasional series of relatives who have had musical success in their own right are two female country singers who I didn't know were related until I watched Country at the BBC last Friday night. Loretta Lynn, the Coalminer's Daughter, hardly needs an introduction.One of the undisputed stars of country music performing from 1960 to date.
Singer of the fantastic Don't Come Home a Drinkin' (with Lovin' on Your Mind)
However the track featured is the title track from her 2004 album produced by Jack White which she recorded at the tender age of 72 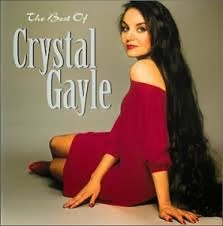 She also had a stellar career but not in the same league, I would argue, as her big Sis.
Most famous for her 1977 country-pop crossover hit Don't it Make My Brown Eyes Blue
Voted as one of the 50 most beautiful people in the world in 1983.