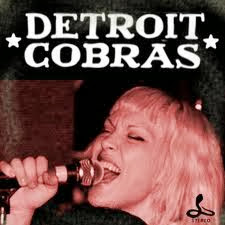 On his last Gospel Sunday post George featured the fabulously named and fabulously talented Dorothy Love Coates and the Original Gospel Harmonettes.
The second song he featured sounded familiar and I knew I had a version of it somewhere (see comments)
I originally thought of Sharon Jones and the Dap-Kings as I was fairly certain they had recorded a version.
But no, the version I have is from the Detroit Cobras from their 2003 EP on Rough Trade " Seven Easy Pieces".
Given there are only 7 tracks on this record you are only getting one.
But do not despair as they will feature again particularly as I have just discovered that their 2004 album "Baby" released on Rough Trade in the UK was on Bloodshot in the US!
So keep tuning in on Tuesdays.
Featuring the dulcet tones of Rachel Nagy.

Detroit Cobras - 99 and a half Just Won't Do

Wilson Pickett -Ninety Nine and a Half (Won't Do)