The Pine Valley Cosmonauts are a bunch of late 20th Century folk dedicated to playing the music of Country Music's rebels, innovators and survivors.
Formed in 1994 and based in Chicago they are led, somewhat inevitably  by Jonboy Langford.
Here on BS029 from 1998 they Salute the Majesty of Bob Wills. 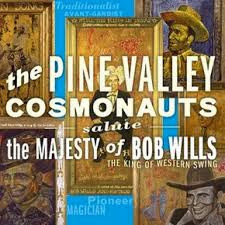 Some facts about Bob Will courtesy of the PVCs


The PVCs are joined by a number of guests on this album and I have chosen two not necessarily associated with the Bloodshot stable.
AND, as an added bonus, I have included the King of Western Swing himself with perhaps his most famous song.

Bob Wills & his Texas Playboys -Take Me Back to Tulsa
Posted by Charity Chic at 08:00