You'll Had Had Your T 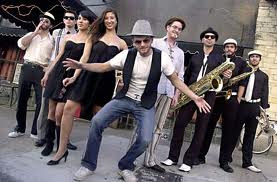 One of my best Internet discoveries has been Tim Crane A.K.A T Bird with his band the Breaks
Based in Austin they produce a big band sound which I would describe as a more Bluesy Sharon Jones and the Dap Kings - high praise indeed
Other than that I don't really know much more about them other than they are well worth checking out.
From the list of albums on their web site they seem to be pretty prolific
This track is taken from the 2008 album Learn About It