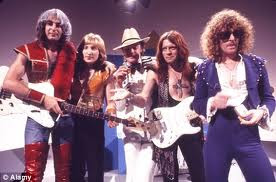 BBC4 have recently being repeating the Ballad of Mott documentary and very good it is too.
However it doesn't mention that the name Mott the Hoople comes from the title of a book by Willard Mannus about an eccentric who works in a circus freak show which producer Guy Stevens read whilst in prison (as you do).
The band were formed in Hereford with Ian Hunter parachuted in as lead singer once they signed to Island.
They were championed by David Bowie who gifted them their biggest hit All The Young Dudes.
Another Bowie connection was Mick Ronson who latterly joined the band ultimately leading to a split with him and Hunter leaving to form a duo with the rest of the band continuing as Mott.
Roll Away the Stone was one of the first singles I ever bought and it has certainly stood the test of time.
London Lee recently posted Saturday Gigs but it is my favourite Mott the Hoople track and therefore you are getting it again.
Oh, and if I lent you my Best of Ian Hunter and Mott the Hoople compilation sometime during the late 80's or early 90's can I have it back please?

Mott the Hoople - Roll Away The Stone

Mott the Hoople - Saturday Gigs
Posted by Charity Chic at 21:22