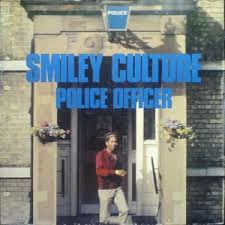 Drew's recent posts about Machrihanish and the bargain bin at Woolies in Lanark put me in mind of the 18 miserable months I spent in the godforsaken  neighbouring Kintyre town of Campbeltown and raiding the bargain bin in Woolies there.

One such purchase was Police Officer by Smiley Culture from 1984.
Given the lyrics it struck me as somewhat ironic to hear that Smiley, or to give him his real name David Emmanuel ,died  at the age of  48 from self inflicted knife wounds during a police drugs raid on his house in March 2011.
There was a great deal of controversy at the time around the cause of his death with a report by the Independent Police Complaints Commission being carried out but not being released to the public or to the Emmanuel family.
Sort of art imitating life or in this case art imitating death