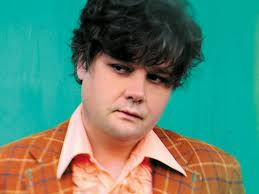 I'm a late bloomer when it comes to the music of Ron Sexsmith.
I'd obviously heard of him and have probably heard a few tracks over the years.
I knew he is Canadian and that he has been mentioned in dispatches by other singer songwriters such as Elvis Costello.
He appears to be one of the many artists who are critically acclaimed but never really do much commercially.
I finally got round to acquiring one of his records 2011's Long Player Late Bloomer which is round about his dozenth release.
It got me to wondering why it took me so long and happily for me there is a pretty large back catalogue to explore.
Not sure about the shirt and jacket combo though!